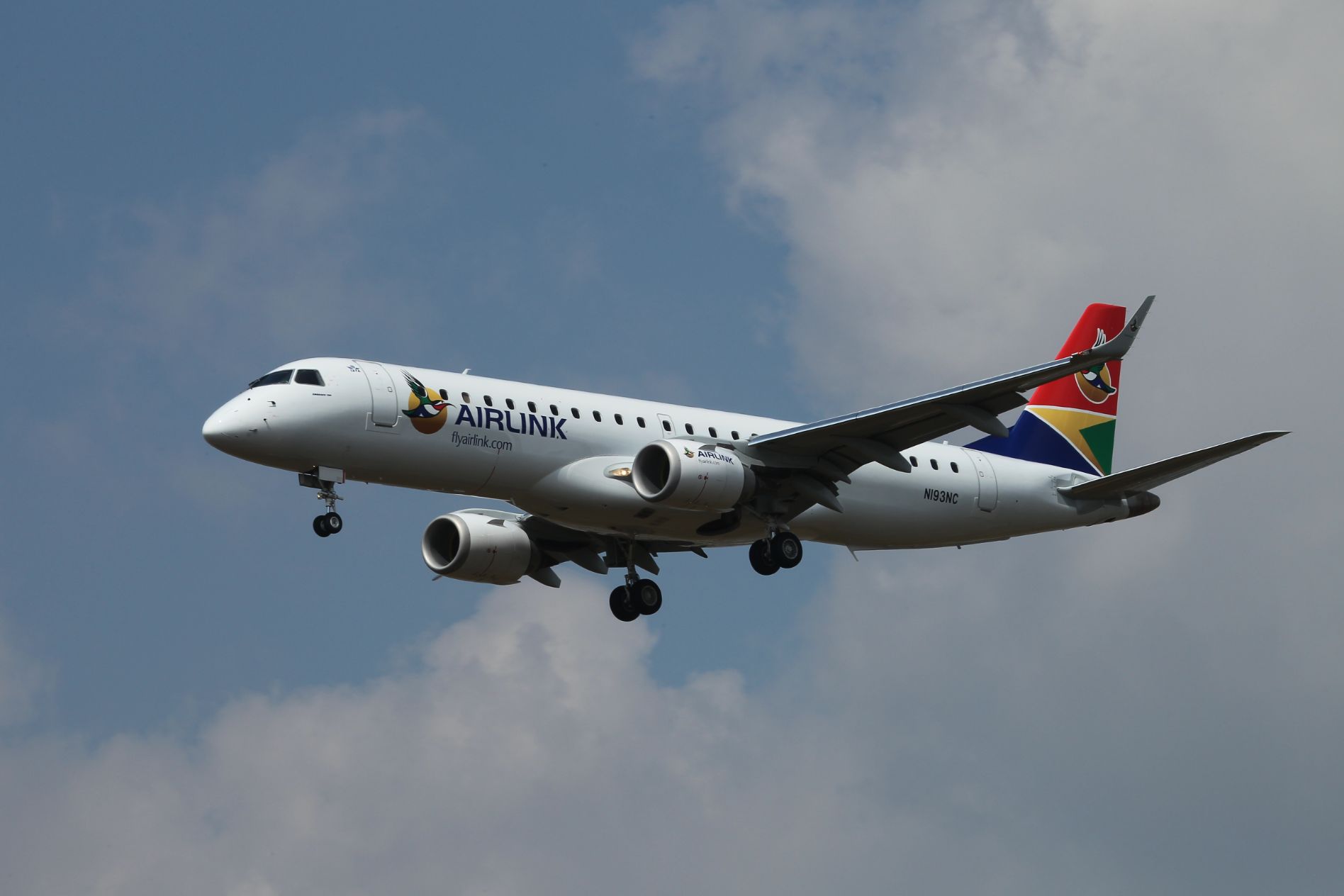 ABOUT AIRLINK – 28 YEARS OF OPERATIONS

When you see the sunbird icon on our aircraft, think Airlink.  You’ll know that you’re travelling with Southern Africa’s largest (measured by flight movements) independent airline.

Airlink has more than 50 commercial jetliners operating throughout Southern Africa.  In 2019 we carried 2 million customers on more than 63 000 flights, on 55 routes to 39 destinations in nine African countries and St Helena Island.  Our passenger profile represents 40% leisure and 60% business.

Airlink’s on time performance is consistently better than 95% and this is a clear indication of our determination and commitment to remain synonymous with customer centricity, punctuality, service excellence and reliability.  Airlink is proudly the most on time South African airline for 2020 as measured by the Airport’s Company of South Africa.

Airlink is a member of IATA - The International Air Transport Association and is IOSA (IATA Operational Safety Audit program) accredited.  IATA is the trade association for airlines across the globe. IATA supports many areas of aviation activity and help formulate industry policy on critical aviation issues. IATA assists airlines to operate safely, securely, efficiently and economically under clearly defined rules.  Airlink is IOSA conformant and have been since 2006.

The cabin layout features expansive business class seats with enhanced comfort by way of a generous seat pitch in a two plus one abreast seating configuration.

Enjoy the Airlink hospitality onboard.

Pre 1992
Airlink's origins are rooted in three small airlines, Magnum Airlines, Border Air and City Air, which merged to form Link Airways in the '80s. Subsequently, Link Airways was liquidated in 1992. After Rodger Foster and Barrie Webb, the two founders, had successfully bid for the business, they named the newly acquired airline 'Airlink'.

When Airlink was first formed, no one within the company could have imagined that the small, fledgling airline would one day grow into the largest independent regional airline in southern Africa, linking passengers to the smaller towns, cities and regional centres than any other local airline.

Airlink’s growth path includes the acquisition of some smaller competitors such as Air Midlands and Metavia. Back in 1992, when it officially commenced operating, the airline’s head count was a meagre 32. Today, Airlink’s staff complement is around 1,000 people. In 1992, only a motley fleet of twin-prop Metroliners and Chieftains was flying the Airlink colours, offering a total capacity of only 25,000 seats per year.

1995
In 1995 Airlink officially launched its new J41 aircraft fleet on 25 March at an August gathering of important guests including Queen Elizabeth II. Today, Airlink boasts a fleet exceeding 30 aircraft, including its flagship fleet of 10 four-engine British Aerospace Avro RJ85s, which accommodate 83 passengers each. The airline currently carries more than one million passengers annually by way of 35,000 flight missions. Airlink is proud to note that, despite fluctuations in the country’s economy, it has shown growth in every single year of its existence.

1997
In 1997 SA Airlink joined South African Airways and South African Express in a powerful strategic alliance which led to the establishment of the leading aviation network in Africa. SAA and its regional partner, Airlink continues their existing partnership. The long term plan for the relationship is to form an alliance, which will allow Airlink to grow in all markets. Airlink will have the opportunity to serve any route domestic and regional which is commercially viable to it.

Airlink's success over the past years is fully attributable to the commitment, dedication and enthusiasm of the Airlink staff, the travel trade, and Airlink's suppliers and customers, who have supported Airlink through some tough challenges over the years. "Airlink has been truly fortunate in having stakeholders of the highest calibre, from our support staff on the ground to our flight crews in the air, including our shareholders," says Foster. "In addition, on behalf of Airlink, I would like to offer my sincere thanks to the travel industry for their loyalty and support, and to our millions of valued customers, for helping Airlink grow continuously over the past 21 years to the solid robust airline it has become at our coming of age," concludes Foster.

Airlink has over many years relentlessly pursued an aggressive intra-SADC regional expansion programme, establishing a comprehensive network of strategically important destinations within South Africa, Zimbabwe, Zambia, Swaziland, Mozambique, Botswana, Madagascar and Lesotho. In all, Airlink services more than 30 destinations throughout southern Africa, with more routes in the pipeline.

1999
In 1999 Swaziland Airlink was formed as a joint venture company between the Swaziland Government and Airlink to take over operations, from Royal Swazi National Airways Corporation, as the national carrier of Swaziland. Swaziland Airlink, the pride of the kingdom, provides direct and convenient daily return scheduled jet flights from Manzini to Johannesburg. Swaziland Airlink offers seamless interline connections with Airlink, SAA and its partner flights around the world. Qualify for free travel by earning Voyager Miles through flying on Swaziland Airlink.

2000
On 3 April 2000, Airlink officially opens the Kruger Park Gateway Airport in Phalaborwa. Phalaborwa, the true gateway to both game and golf, is the central gate to the world's most famous nature reserve, the Kruger National Park. The airport is situated approx 2 km from the Phalaborwa Gate, providing easy access to the northern camps such as Letaba, Olifants, Mopani, Shingwedzi and Punda Maria as well as many famous private game lodges. Admire the Park by open 4x4 vehicle, or take a safari on the Olifants River amongst hippos, crocodiles and other wildlife. A bush walk offers a close encounter with the habitat of the Parks wildlife.

2006
In January 2006 something new took flight, Airlink - formerly SA Airlink - did not only change its name but corporate identity too, giving you the freedom of flying to the smaller and regional centres and cities throughout Southern Africa. To achieve this essential objective, our new corporate identity programme clearly represents the concept of flight, graphically emphasising the airlines corporate positioning statement, "Freedom of the African Sky". And clearly positions Airlink as being "Proudly South African", with our tail displaying the distinctive national colours of blue, red, green and gold. It also uniquely features the brightly coloured and popular "Sunbird" found flying throughout the African Continent.

Airlink new advertising campaign embraces, the dream of flight that has long captured our imaginations, as children we would extend our arms like wings and run about without a care in the world ... and that's exactly the message we want to communicate to our passengers - spread your wings and fly with Airlink.

Airlink successfully completed the IATA Operational Safety Audit (IOSA) and were placed on the IATA Register on 6 February 2008. So you're assured of the highest possible standard of service whenever and wherever you fly Airlink. The airline is continually setting benchmarks in operational safety and reliability through superior standards of professionalism, efficiency and a strong focus on customer service delivery.

2009
In October 2009 Airlink moves into their new head office based in Greenstone Hill Office Park, Modderfontein.

2013
11 June 2013, Airlink celebrates 21 years in the aviation industry. Today, Airlink has a turnover of more than two billion Rand, employs about 1,000 staff, and carries one million-plus customers annually.

2014
02 June 2014, Airlink launched the return of scheduled air services between Cape Town and Johannesburg to Skukuza Airport, this was momentous in the context of South African tourism as this has allowed all tourism stakeholders and tourists the ability to gain direct access to a variety of important and globally renowned wildlife destinations within the Kruger Park and nearby Sabi Sand Private Game Reserve, thereby providing a far more integrated and effective leisure travel product to the global market. The airport is managed by the Skukuza Airport Management Company, in conjunction with SANParks, in terms of a 10 year Public Private Partnership agreement.

2015
16 August 2015, Airlink becomes the first domestic airline (it’s still the only non-charter option for that route) to offer scheduled flights between Cape Town and the then recently refurbished Wonderboom Airport in Pretoria.

2016
Airlink signed an agreement with the government of Madagascar. Working with a partner there to amend air services licenses, establish Air Operating Certificates, and all the rest, and that service will be running in Madagascar as an extension of the Airlink business – hopefully from later this year onwards.

2017
11 June 2017, Airlink celebrates its 25th anniversary under the same leadership and the 50th anniversary of one of our roots Lowveld Air Services started in 1967. Today, Airlink has 46 aircraft, a turnover of more than three billion Rand, and employs approximately 1,350 staff.

2018
In December 2018, the Airports Company SA (ACSA) presented a Feather Award to Airlink in recognition of Best Performing Regional Airline.

Our Investors and Owners

We are privately owned, financially independent and not reliant on State Subvention for subsistence. This includes our 350,000 previously disadvantaged families from the Sishen, Sishen South and Thabazimbi areas.

We have been consistently and responsibly profitable during 28 years of operations.

We are the largest regional airline in our sub region, operating an extensive network to South African cities and towns including services to Namibia, Botswana, Zambia, Zimbabwe, Mozambique, Madagascar, Lesotho and eSwatini as well as to the remote island of St Helena in the South Atlantic. With the widest network and choice of flights, and the largest fleet of commercial jet airliners in southern Africa, our customers also have the freedom to enjoy intra-continental styled business class on our E-jets, operating select routes and flights.

We have a fleet of more than 50 aircraft, 80% of which are regional jet airliners. Having this amount of aircraft means that we are able to swap aircraft to recover schedule in the event of a delay. Our fleet of aircraft are supported and maintained by a dedicated team of 400 aircraft engineers and specialists located at various key nodes within South Africa including 3 hangar complexes at OR Tambo International airport.

We employ a team of 450 flight deck and cabin crews, of whom 250 are proudly female. They are trained in our own state-of-the-art Flight Training Centre located in Bonaero Park, Johannesburg. The complex includes 3 aircraft simulators, cabin trainers and other procedural aids and classrooms providing the opportunity for comprehensive training from early ab initio crews starting their careers in flying to bi-annual recurrent/refresher training as well as type training as a part of career progression.

We understand that our customer’s most important criteria for choosing Airlink over other operators is punctuality. Airlink is consistently ranked as one of the two top airlines for on-time operation in
South Africa’s skies. In 2019 more than 92% of Airlink’s flights departed on-time (an independent measure applied by ACSA - the Airports Company of South Africa). 2020 is no different and we currently have a punctuality rate of 95%. We know that to cancel a flight without there being very sound reasons, outside of the airline’s direct control to do so, is extremely distressing to our customers because of the disruption it causes to their travel plans.

We are a member of IATA (International Air Transport Association) and is IOSA (IATA Operational Safety Audit program) accredited. We are IOSA conformant and have been since 2006.

We are certified level 4 BBBEE. You can view our BBBEE certificate here.