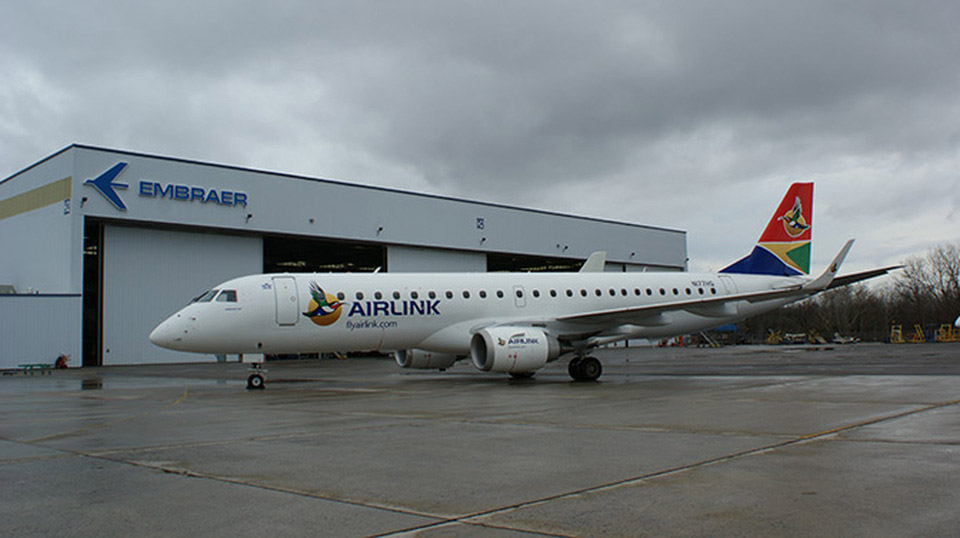 Amsterdam, The Netherlands, January 19, 2017 – Airlink, Southern Africa’s largest independent regional airline, is joining the E-Jet operator’s family. The airline is acquiring five E-Jets - three E170s and two E190s, from ECC Leasing, a wholly-owned Embraer subsidiary. Airlink will start to receive the aircraft in the first half of 2017.

Airlink already operates a large fleet of ERJ aircraft – last December, the airline started to add 11 further ERJ 140 jets to its fleet. By the end of the fourth quarter of 2017, the airline will be operating 30 ERJs, comprising all three types - ERJ 135, ERJ 140 and the ERJ 145.

Rodger Foster, CEO of Airlink, said, “This is the beginning of the implementation of a well planned growth and modernization strategy for Airlink that includes replacing our current fleet of Avro RJ85s over the next three years. The strategy calls for a total of 13 E-Jets, and we are in the process of sourcing the balance of the fleet requirement – an additional 8 E190s – from the market.  The unique performance characteristics of the E-Jet family will enable Airlink to operate within the challenging environment of the region, including short field and “hot and high” operations, while managing capacity and providing for growth.”

Foster continued, “the E190’s ETOPS (Extended Twin Engine Operations) capability and range presents Airlink with new market opportunities to address isolated destinations that were previously beyond our reach and in some instances that have never enjoyed the privilege of reliable scheduled air services. Embraer has proven to be an excellent partner for Airlink on our ERJ fleet, and we look forward to the continuation of superb customer support as we enter a new chapter of growth with the E-Jets.”

“Welcoming another operator to the E-Jet Family is always a great endorsement of our aircraft and the Embraer experience”, said Simon Newitt, Vice President, Africa, Latin America & Portugal, Embraer Commercial Aviation. “We are very proud that Airlink will now become the first South African operator of the type.”

Embraer aircraft have been operating in Africa since 1978, when the first Bandeirante turboprop arrived on the continent. Currently, there are 127 Embraer aircraft in operation with 39 airlines in 19 African countries, performing a vital role in connectivity.

Embraer is the world’s leading manufacturer of commercial jets with up to 130+ seats. The Company has 100 customers from all over the world operating the ERJ and the E-Jet families of aircraft. For the E-Jets program alone, Embraer has logged more than 1,700 orders and over 1,300 deliveries, redefining the traditional concept of regional aircraft by operating across a range of business applications.

Airlink is the largest independent regional airline in southern Africa, linking more passengers to the smaller towns, cities and regional centers than any other local airline. Airlink connects 36 destinations in 9 African countries.

The airline currently carries more than 1.4m passengers on 44,800 flights annually. Airlink has shown growth in every single year of its existence. Our passenger profile represents approximately 30% leisure and 70% business.

Airlink’s main hub is Johannesburg where our schedule is aimed at addressing the complexities of market demand and is specifically designed to satisfy point to point travel requirements whilst also optimizing interline connectivity, particularly with the arrivals and departures of our franchise partner of twenty years, South African Airways, and all other IATA member airlines.

Embraer is a global company headquartered in Brazil with businesses in commercial and executive aviation, defense & security. The company designs, develops, manufactures and markets aircraft and systems, providing customer support and services.

Since it was founded in 1969, Embraer has delivered more than 8,000 aircraft. About every 10 seconds an aircraft manufactured by Embraer takes off somewhere in the world, transporting over 145 million passengers a year.

Embraer is the leading manufacturer of commercial jets up to 130 seats. The company maintains industrial units, offices, service and parts distribution centers, among other activities, across the Americas, Africa, Asia and Europe.