The Adrenalin show was an opportunity for Airlink to support and endorse the Wonderboom Airport, to showcase the airports allure as a gateway of choice for Gauteng.

Some Facts About Airlink at the Show 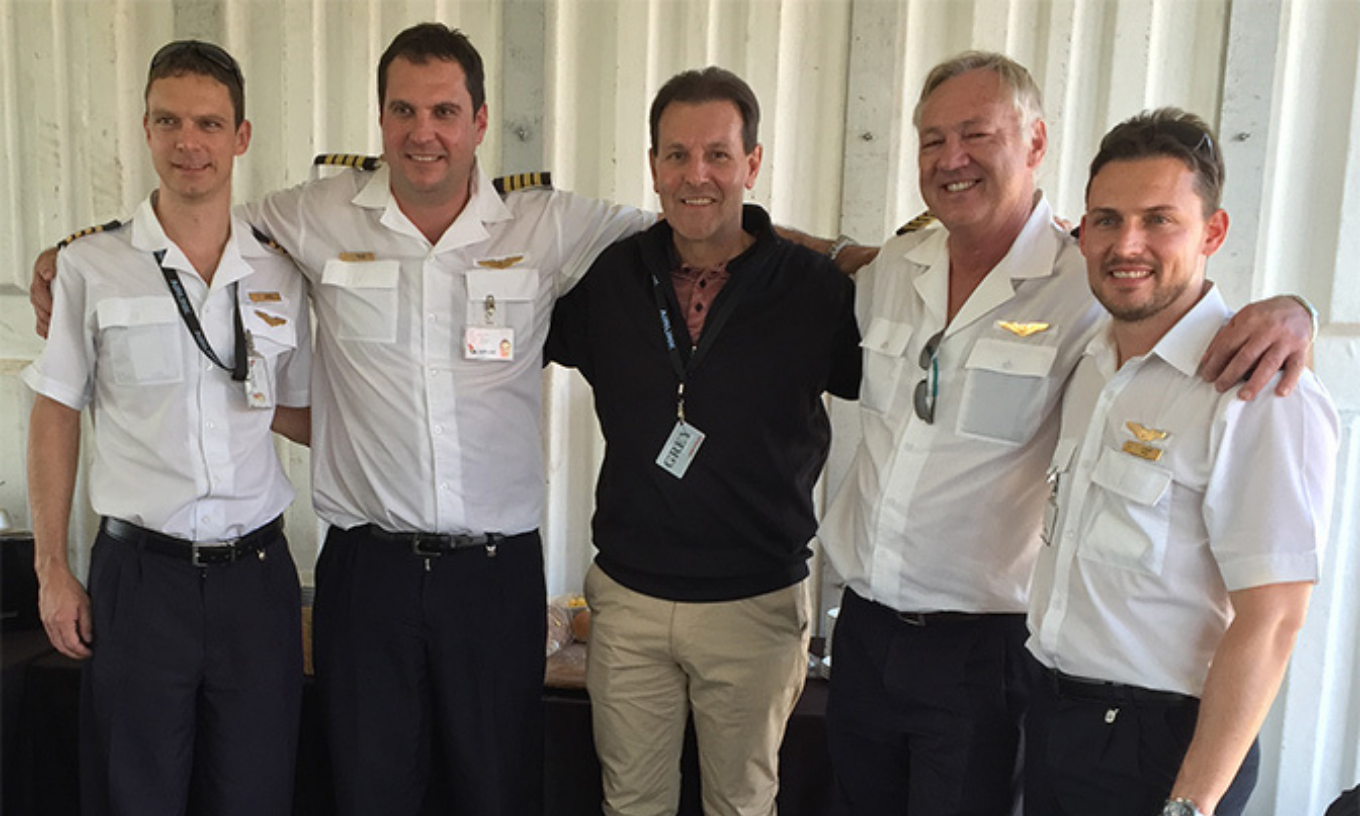 According to Oupa Lintvelt, Executive Manager Flight Operations and Standards, the planning for the display was all done in-house.

The initial plans for the display were to show off the capabilities of the RJ 85 through a flight display. An Airlink formation flypast was going to be the culmination of the Airlink flying display during the show. Being aircraft of different types we decided that a Line Astern formation would be the easier one to fly.

We knew from the onset that the RJ’s display had to start off with a short take-off and a steep climb to the display altitude. Capt Hannes Venter, our Fleet Captain Training on the RJ Fleet, started experimenting with a possible two turn routine in the simulator in Zurich.

Captain Gareth McGahey, an instructor on the RJ fleet, was selected to act as First Officer during the display and formation flying and Captain Johann du Toit, the Fleet Captain of the RJ Fleet was nominated as safety pilot.

After talking the proposed sequence through with the co-organiser of the event, Mr. Chris Briers, it was decided that the ERJ and the RJ both had to depart from Wonderboom Airport, from a position from where the spectators could see the RJ use much less runway than the ERJ when getting airborne. Actually the ERJ did a normal take-off and the RJ a short take-off for emphasise versatility of the RJ.

Chris Briers and I then discussed the possible manoeuvres during the display and it was decided to limit the display to the short take-off and a low level steep turn through 450 degrees in front of the spectators. As we discussed the turn the idea of selecting the landing gear down so the spectators could see it extend was born. From there it was what we had planned in the original routine that Captain Venter practiced in the simulator.

The shortened routine was discussed with Captain Venter and seeing that he had another week of training to present in the simulator he took the time to practise the shortened version. He also sent us the timing of the display and print-outs of the turns from which we could plot the position of the aircraft during the show for the SA CAA.

It is always nice to see and hear a big aircraft during a missed approach. The RJ is exceptionally slow at the display weight and the spectators would have time to marvel at her beauty as she did the approach in full landing configuration with the Speed Brake in the tail wide open. From the beginning it was decided to execute the missed approach in the middle of the crowd-line and then to go fetch the ERJ. During the practise run on the day before the display it was decided to add the high speed, low level flypast from the West to the routine before the formation form-up with the ERJ.

For the formation flying the Chief Pilot was initially nominated to be the Captain of the ERJ, however not very many of our pilots are ex-military anymore so there is not a great level of formation flying experience in the company. The First Officer of the ERJ, Loedolff Muller is ex-military and an ex-member of the Air Force’s Silver Falcon Formation Aerobatic Team. There was therefore only one choice of who to task with the actual formation flying and that was this young man. The Chief Pilot stepped down from the flying when the Fleet Training Captain of the ERJ Fleet, Captain Louis Harmse, hinted that he would like to be in the formation. The Chief Pilot, Captain Jaco Henning was then nominated as the safety pilot for the ERJ.

During the morning of Wednesday, 8 June an initial briefing was done with the ERJ crew. Valuable information was exchanged and Loedolff’s experience in formation flying became evident in the questions he asked and suggestions he made.

I spent the best part of the 9th looking at the route the formation would have to fly for the most effect. An easily recognisable feature to hold at was selected at the Rodeplaat dam. From there ground features like intersections and buildings was picked along the track and the timing done. For use in the formal formation briefing I also took pictures of the model RJ from where I thought the best positions could be to sit in during the formation.

On Friday, the day before the show, we had a formal formation briefing where all the crew involved attended. The RJ crew quickly asked for the co-ordinates of the ground features to put it in the Flight Management system. Now they could just follow the FMS and know the will be exactly where they have to be.

Loedolff again helped the other pilots in the finer techniques of formation flying by explaining what he would require from the leader of the formation to ease his workload as the Number Two.

Just after 08:00 the two aircraft departed Johannesburg International for their only practice in formation and the display flying. I ensured that the Air Traffic Control at Wonderboom was aware of the formation coming into their area. A rough rundown at the routing and the time over target was given and I then waited for feedback.

The first feedback came from the Chief Air Traffic Officer at Wonderboom around 09:00, or shortly thereafter, when I received a call that the Airlink aircraft had started their run-in. As the formation approached the excitement on the other end of the line grew and I just knew the pilots had put up a good show after just a short bit of practise.

After the formation break the ERJ was given permission to do a high speed low level (100 feet above the ground) flypast. The organiser/safety official of the show immediately requested that this become the grand finale of the Airlink display!

Feedback from the crew said they were a little loose during the practise runs and that they would tighten up the formation on the Saturday and Sunday. From the eye witness accounts and the video footage we have so far the crew of the RJ display and the formation pulled out all the stops and thrilled everybody at the show.

As one spectator remarked: "Through this display Airlink has truly stolen the glory at the Airlink Adrenaline Show."