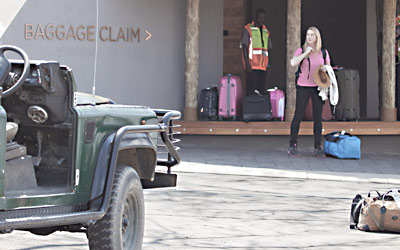 If baggage allowances differ per sector on an interline air-ticket (normally a sector fare construction), the allowance per sector shall be applied. In this instance, if excess baggage charges are applicable, these should be charged separately per sector however passengers may still be through-checked.

In case of through-check-in on airlines other than SAA, the applicable excess charges should be charged if required for each part of the journey.  If excess baggage applies on a routing where no published excess baggage charge is available, the applicable charge applies in the direction of travel for SA sectors and for other airline sectors according to the transporting carrier’s rules and charges.

N.B. Not to be accepted as excess baggage on international and regional routes – refer to Airlink Cargo.

AVIH is not included in the free baggage allowance. The animal shall be carried in a container that meets the specification of the "IATA live animals regulations". Suitable containers may be purchased from selected pet shops.

Weight Concept (WC): Normal excess baggage rates apply for all 4 (four) crate sizes including the weight of the animal.

Airlink may accept for transportation in the aircraft cabin without charge:

No excess baggage charges shall be raised for the carriage of the following items:

Sportsmen or women travelling individually or in groups will be permitted to include their sporting equipment in the free baggage allowance applicable to the class in which they will travel. Airlink will not accept liability for damage to such articles if they are not suitably packed. Sporting equipment in excess of the applicable free baggage allowance will be charged in accordance with the current baggage policy.

The Sporting equipment classified below will attract an additional Free Baggage Allowance of 15kg per passenger. To ensure acceptance of such at the airport, a facility is offered whereby this may be pre-booked as a Special Service Requirement in respect of Sporting Equipment (SSR SPEQ) through your travel agent or through the Airlink Reservations Help-Desk on Tel +27 11 451 7350.

Exception: If passage is between Johannesburg and Nosy Be, Madagascar an allowance of 20kg only will be permitted per adult/child passenger. Note: Sporting Equipment can only form part of the free baggage allowance and no excess baggage will be permitted.

1. Sporting Equipment NOT specified above must be included in your free baggage allowance, please contact Airlink Head Office for verification. Please note that this sporting equipment will be permitted strictly at the discretion of the Airline.

2. Hold space restrictions on Airlink aircraft due to the nature of the smaller airports which Airlink serves with medium-size aircraft, hold space may be restricted on full flights and/or in certain weather conditions.

In such instances Airlink will do all possible to load all hold baggage but, in the interest of operational safety, may elect to carry some baggage on the next available flight to your destination. Extra baggage may also be carried at an additional charge. However, this may not guarantee that the baggage is carried on the same flight on which you travel, under the afore-mentioned circumstances.

3.    The following items cannot be accept as Checked baggage on Airlink:

Musical instruments may be accepted into the passenger cabin provided they fit under the passenger seat or in the overhead bin provided. Where in exceptional cases a passenger is prepared to pay for an extra seat in order to carry extremely valuable baggage e.g. antique musical instruments, works of art etc, acceptance is only permitted if the safety and comfort of other passengers will not be impaired and if the size of such baggage permits it to be secured on the seat in such a manner as to prevent movement forward, sideways or upwards in an emergency situation. Large musical instruments e.g. cello, guitar are not permitted in the cabin and should be placed in the hold of the aircraft.

Arrangements must be made with Airlink Control Office (tel. +27 11 451 - 7300) for fragile musical instruments/bulky baggage. This type of baggage must have "Fragile" labels attached and assigned a "Limited Release" tag.

A maximum mass of 10kg of perishable goods may be included in the free baggage allowance. Due to its perishable nature, it will be carried at the passenger's own risk and will not be accepted on regional flights.

These are acceptable for carriage as checked baggage, provided the passenger is in possession of all the necessary documentation and the casket containing the cremated remains is packed in a sealed outer box or case.

Permits are not required for the conveyance of the ashes of bodies which have been cremated in a crematorium, but a certificate of cremation must be produced if required by security prior to boarding.

Coffins containing human remains are not accepted at check-in but only as Cargo after an assessment is made due to the restricted cargo capacity size of Airlink aircraft..

Your hold luggage should not contain:

Airlink will assume no liability for loss or damage of the aforementioned and may refuse to carry such as Checked/SkyCheck baggage.

Items NOT to be included in unchecked baggage

The following list (aligned with ICAO and IATA recommended practice) is provided as a guideline of what items are not to be allowed in the cabin of Airlink aircraft. Items indicated on this list, except firearms and ammunition, may however be carried in the checked baggage of passengers. This does not include the obvious items considered as harmful items i.e. knives, firearms, explosives, grenades, etc.

Certain items not listed as Prohibited items which may be carried on a person or in cabin baggage for medical or other use, such as syringes and hypodermic needles should be declared to Airlink check-in agent or checkpoint security staff. Airlink will accept the carriage of these items in the cabin of the aircraft only if such items are accompanied by clearly labelled medication such as insulin or other life saving medicines. Unlabelled or unidentified substances accompanied with syringes, or packs of needles not accompanied by the above, may be denied for carriage on a person or within cabin baggage. Passengers carrying these items, when not requiring access to such items during flight, are encouraged to rather pack these within their checked baggage. When such items are considered as unjustified or non essential, security staff may confiscate such items if a passenger fails to provide sufficient reason and/or medical evidence to carry such items.

Further restrictions on items allowed in sterile areas of airports, may be imposed or may differ from country to country, dependant on the Policy of the Local Authorities.

To minimize the risk of PED's interfering with the aircraft systems, the carrier must ensure that passengers are adequately briefed on the potential dangers of using PEDs onboard aircrafts. Certain PEDs may only be used during the cruise phase of the flight with permission of the Captain, who has the final authority regarding such usage. These include:

The following equipment may be used onboard the aircraft without restriction:

The following equipment is prohibited from use on board an aircraft at all times:

Items that may not be carried onboard an aircraft:

Items that may be carried onboard an aircraft:

Items that are forbidden on Passenger and Cargo Aircraft

FIREARMS AND AMMUNITION (SUBJECT TO ARRANGEMENT WITH AIRLINK PRIOR TO DEPARTURE)

Rifles and shotguns will not be accepted as Checked Baggage, unless approved no less than three (3) working days prior to departure through Airlink Reservations Control Tel +27 11 451 7350. Rifles must be unloaded with the safety catch on, and suitably packed and accompanied by all documents legally required by the countries of departure, destination and any stopovers. Only five (5) kilograms of ammunition is allowed per Passenger. Ammunition will never be carried in the cabin or flight deck of the aircraft. Ammunition must be packed separately and securely from the firearm case.

Weapons such as antique firearms, swords, knives, toy or replica guns, bows and arrows and similar items may be accepted as Checked Baggage only at the airline's discretion. This is subject to prior approval and will not be permitted in the cabin or flight deck of the aircraft.

Airlink will have no liability or responsibility where any item accepted is removed from Checked Baggage and/or retained or destroyed by security personnel, government officials, airport officials, police or military officials or other airlines involved in the carriage of a Passenger.

When International or Domestic Checked baggage is delayed, the baggage service agent may authorise interim expenses to purchase essential items such as toiletries necessary for immediate use only to Passengers who do not reside in the city where the delay of the baggage occurred.

This "first need" expense can be up to an allowance of three hundred and fifty South African Rand (ZAR350) per day after twelve (12) hours until the Passenger is in possession of the Checked Baggage, but limited to five (5) days. The Passenger needs to purchase the “first need” items and receipts for payout are required and will be deducted from the final claim settlement if the Baggage is not located.

The extent of Airlink's liability is determined by the applicable Convention being either the Montreal Convention or the Warsaw Convention.

The liability of Airlink in this regards to any claim that the Passenger may have against Airlink in regards to Loss or Damage to Baggage is limited to the higher of:

Airlink may refuse to carry as baggage: